skip to main | skip to sidebar

I love Grey’s Anatomy. At the end of the second season, a few people at my work were talking about how good Grey’s Anatomy was. I decided to start with the first season and watch it. Dennis and I watched the first season in a few days and couldn’t wait until the second season came out. The day it came out, which was about 2 weeks ago, Dennis bought it for us. We have been watching it like crazy so that we could start season three when it came on again. We are finally just about caught up. We will finish season two tonight and I have recorded the first two episodes of season three so that we could stay in order. It is a great show. I’m not a big TV person, but Dennis is slowly but surely changing that. I am really getting hooked on several weekly shows. Lost is another one that we watch. The next season starts Wednesday and I can’t wait. The last season leaves you hanging like always. If you don’t watch theses two shows, you should really start. You will not be disappointed.
Posted by Stephanie Steed at 10:18 AM No comments:

It has been awhile since the last time I posted anything. Not much has been going on. Dennis had Abbey and Brandon last weekend so we went and ate catfish with his mom on Friday night. It was really good. Saturday we shopped around some and then Dennis had to work so I watched Abbey and Brandon for him. Monday night he had a softball game. It was at 6:15 and I didn’t think that it would be that cold but I froze. This next Monday I will be sure and take a jacket. They have a double header so we will be out there a little later. Tuesday night we went and ate oysters at Stone Pony in Canton. They have $.25 oysters on Tuesday night. We have been talking about going for a few weeks, but Dennis usually works on Tuesday’s. He took off so that we could go. It was really sweet of him. Yesterday Dennis worked at the Southern Farm Bureau Classic Golf Tournament. His company is the main sponsor so they get to volunteer to work a day. It is really nice because they get to spend a whole day playing pretty much.

We are going to my grandparent’s house this weekend. It has been a REALLY long time since I’ve been. I think the last time was Easter. They were really excited. My mom is going to meet us there. On Sunday Dennis is getting Abbey and Brandon at 1:00 and we are going to the golf tournament for a little while. I hope the weather is nice. That is about all that has happened in the last week. Have a good weekend!!!!
Posted by Stephanie Steed at 2:28 PM No comments: 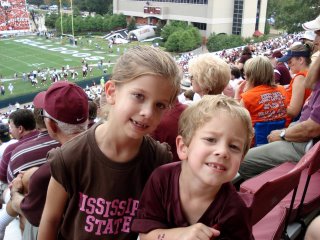 I love this picture of Abbey and Brandon. It was taken at the MSU vs. Auburn game a few weeks ago. I like it so much because Abbey is an Ole Miss fan and I bought her Mississippi State gear to wear to the game. She even had a cowbell to ring. I loved it. As you can tell, the game was so hot. It was during the middle of the day.

This has been a very fast but stressful week. We have gone paperless at work and it has been a nightmare. To start off, we didn’t receive the amount of training that I think we should have gotten. The new program is a lot harder and has a ton a little detail things that was left out during training. We have pretty much had to get in there and just start working to figure things out. I have been extremely tired this week. I am so glad that Friday is finally here so maybe I can get some rest this weekend. Have a great and safe weekend.
Posted by Stephanie Steed at 1:46 PM No comments:

We have another big weekend planned. It should be lots of fun and Abbey and Brandon should have a great time.

Tonight we are eating dinner with Dennis’s mom, sister and her kids. Then we are off to Disney on Ice. This year is The Incredibles. I am excited because I have never been and have been wanting to for a long time. Tomorrow we are getting up very early and going to the MSU / Auburn Game. It is at 11:30. Abbey and Brandon have never been to a college football game so I am excited to take them to there first at Mississippi State. Abbey is an Ole Miss fan but I am slowly but surely trying to convert her. :) My parents are riding with us and we are meeting my sister for breakfast. We are going to take the kids to the Lodge to buy them t-shirts. I am going to purchase them a mini cowbell so they can sneak in the game. They are so much fun to have. Hopefully the game won’t be too hot but it is at 11:30 so I am sure we will sweat to death. The good thing is Dennis is off so we won’t be in a rush to get back. I will post pictures on Monday of our weekend. I hope everyone has a great and safe weekend.
Posted by Stephanie Steed at 3:50 PM No comments:

Dennis and I had a great time at the MSU game on Thursday night. The weather was very nice. It wasn't as hot as I thought it would be. We have already planned on going to the Kentucky game at the end of October. Below are pictures from the game: 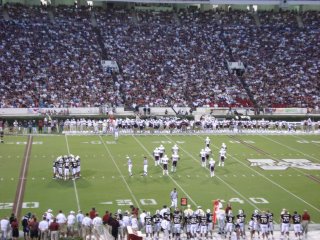 Posted by Stephanie Steed at 10:24 AM No comments: 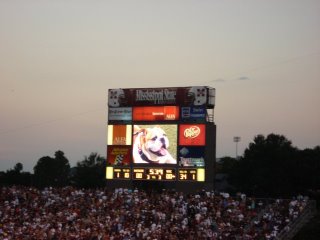 Posted by Stephanie Steed at 10:17 AM No comments: 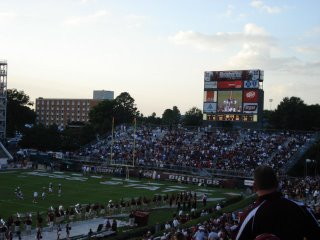 Posted by Stephanie Steed at 10:16 AM No comments: 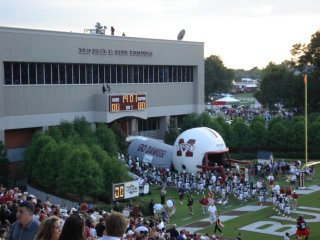 Posted by Stephanie Steed at 10:15 AM No comments:
Below is the picture of Abbey and Brandon that I had framed for Dennis. It looks perfect on his wall. The finished prject turned out great! 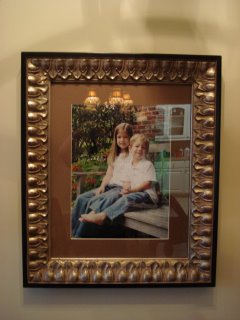 Stephanie Steed
I am married to the greatest guy and have the best four kids a girl could ask for. We are so blessed for all that we have and thankful for what God has given us.